On the street, he's known as "Zombie." But Boca Raton Police know him as 31-year-old Jesse Russell, a man whose face is covered in tattoos and who is now in jail for allegedly selling drugs at a gas station. Two officers first noticed Russell while conducting surveillance at a BP Gas Station at around 6 pm on Wednesday. A blue, four-door Mercury pulled into the parking lot and parked next to a Mitsubishi in front of the station's convenience store.

When the driver, later identified as Russell, looked at the officers, he immediately backed out. The man's appearance stuck out. The driver of the Mitsubishi, later identified as Quenesha Hall, then stepped out of her car and hopped in Russell's backseat. Then, oddly, Russell parked the car. The two then got out and hopped into the Mitsubishi. The officers then walked up to the car. "I immediately detected an odour of marijuana emanating from the interior," an officer wrote in a report. 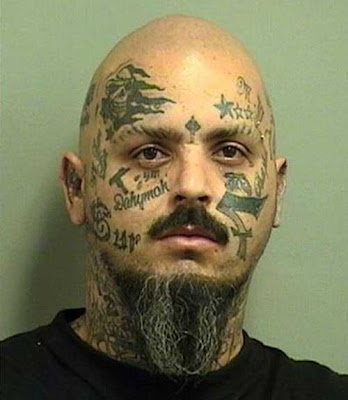 As the officers identified themselves, Hall and Russell both reached for their waistbands. The cops drew their guns and demanded the duo to put their hands on the dashboard. They did. The report says Russell had been trying to hide a blue pill bottle and some cash in his pants. The pill bottle held a prescription for Aprazolam. Records showed Russell filled the prescription one day earlier. Searching Russell's Mercury, officers also found some marijuana.

Russell said he would not talk with police, because he was on probation for armed robbery. So, police interviewed Hall. "Hall at first told me that she was meeting Russell to discuss a new tattoo." She then admitted she called Russell, known to her as "Zombie," and arranged to buy 28 of his Aprazolam pills. "Me and Zombie are good friends," Hall said. "He was helping me out." The recent calls on Hall's cell phone showed she called Russell, named Zombie in her contacts, less than an hour before they both landed in jail.
Posted by arbroath at 6:07 am
Email ThisBlogThis!Share to TwitterShare to Facebook