Firefighters responding to a house fire in North Portland, Oregon, on Saturday evening had to wait for police to detain a man who met them swinging a sword and holding a shield. 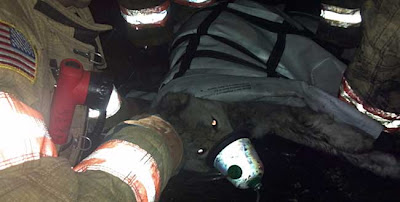 Sgt. Greg Pashley with the Portland Police Bureau said firefighters first encountered the man on the front porch of the burning house. Officers tried to talk to the man, but he kept swinging the sword and yelling incoherently, Pashley said.

Officers fired a Taser at the man then took him safely away so firefighters could get in. Once firefighters managed to get into the burning house at 7827 North Hodge Avenue they found a dog that was suffering from smoke inhalation. They used a special dog oxygen mask to help the dog and took it to safety.

Firefighters got the fire under control about 20 minutes after they arrived. There was around $40,000 in damage to the house. The exact cause of the fire is under investigation. Pashley said the 69-year-old man who was swinging the sword suffered a cut from broken glass and was taken to the hospital for a mental evaluation.
Posted by arbroath at 6:06 am
Email ThisBlogThis!Share to TwitterShare to Facebook