A woman In Darebin, Victoria, Australia, used an infra-red camera to film a man stealing underwear from her clothes line. Police are hoping someone might recognise the man, who since October has been entering the backyards of several houses in the area.

Northcote Constable Stacey Dwyer said the woman who took the images first reported the matter to police in October when she realised underwear was disappearing from the clothes line. 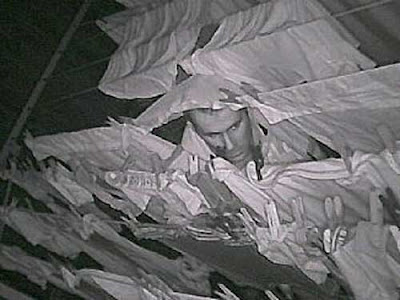 "We told her it would help if she came back with some footage,'' Constable Dwyer said. The woman set up the camera and the man struck again, between 2-4am.

Constable Dwyer said the man generally hit the clothes lines on Friday or Saturday nights. She said police had escalated patrols and were using the dog squad in attempt to sniff out the perpetrator but with no success so far.
Posted by arbroath at 6:07 am
Email ThisBlogThis!Share to TwitterShare to Facebook

He should at least have the decency to return them when he as finished. On second thought, maybe she doesn’t want them back.