Cat stuck on undercarriage of train for 1,700 miles recovering after being treated by vets

An adventurous cat has been treated at a Penzance vets after stowing away in the undercarriage of a train for 1,700 miles. Polly the tabby, who had a badly-broken leg, is thought to have climbed on board the high speed express near her home in Plymouth. She then spent two days trapped under the front carriage as the train thundered between the West Country, London and South Wales. The poor pet, belonging to a retired train driver, was only discovered and taken to Rosevean Vets, Penzance, after train staff heard her frightened meows. 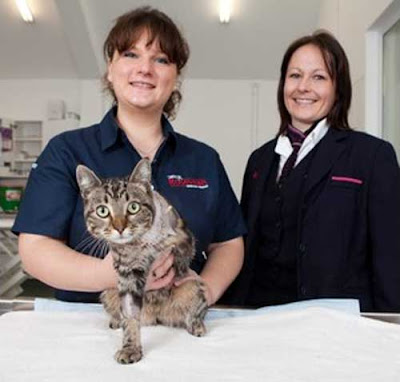 "She was in quite a bad way with a very nasty, open fracture to her front left leg," said vet Matthew Berriman. "I think it's extremely possible that the cat was stuck on the train for several days, from the way its leg was looking. The fracture was easily four or five days' old by the time we operated. It wasn't something that had happened a couple of hours' before." Train manager Emily Mahoney-Smith, who discovered the two year old moggy, took her on board and fed her tuna from a buffet sandwich. She then contacted the RSCPA and Polly was taken to the vets when the train reached its final stop in Penzance.

Mr Berriman said the cat was in such a bad state he thought she was a stray and was preparing to put her down. But she used up her final life when he decided to check if she had been micro chipped – and was stunned to find she had. The chip gave the details of a Plymouth cattery that looked after Polly before giving her a home with Arthur Westington, 84, and his wife Louisa. Matthew got in contact with a stunned Louisa, 82, to ask permission to operate and his colleague Jenny Fanning amputated Polly's front left paw. Polly disappeared from her home – close to Plymouth's main rail shunting depot – three weeks ago.

Owner Louisa, said: "We missed her and were very surprised when the cattery rang to say she'd been found and was in Penzance. She's certainly seen more of the country than we have." Train operators First Great Western added: "We're pretty sure the cat had been stuck on board for some time. It was ensconced in the underbelly of the train and it couldn't have got in there unless the train was in a depot or static for a considerable period of time. We've calculated it did at least 1,667 miles but luckily we managed to get it to a vet and it's going to have a happy ending by going home."
Posted by arbroath at 6:01 am
Email ThisBlogThis!Share to TwitterShare to Facebook