Eleven Canadian fire fighters used a chainsaw to cut through a door and then saw a pathway through ceiling-high mounds of garbage packed inside a small Burnaby, British Columbia, home to rescue an elderly man who had been pinned under debris for at least three days.

RCMP were called to the house in the city east of Vancouver on Monday night after an anxious friend reported not seeing the neighbour, in his 70s, for several days. Police sought the aid of the Burnaby Fire Department, whose members arrived later that night to help them gain entry. 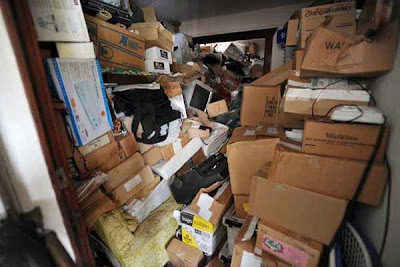 Inside, they discovered “quite a mess” before uncovering the trapped man, said Assistant Fire Chief Greg Mervin. “These fellows had to go in and try and find a problem there, and they had to dig through to find this fellow,” he said on Tuesday, adding the man was suffering severe dehydration. There was neither heat nor electricity in the house.

“Had it been another day or two, with our cold temperatures, the outcome may have not been as good as it was. It was probably very rewarding for these firefighters.” The incident required more emergency workers than for a typical rescue, he said, adding city bylaw officers have been previously called to the same home for complaints from neighbours about the junk piling up on the outside of his property. The man is recovering in hospital and being treated for possible circulation problems in both legs.