A rescue team had to pull a whole herd of real-life Bambis to safety when they plunged into a frozen lake after the ice collapsed underneath them. The stricken herd - crossing a lake in Gryfice, in north west Poland - were spotted by anglers who called emergency services when they saw the ice suddenly shatter underneath them. 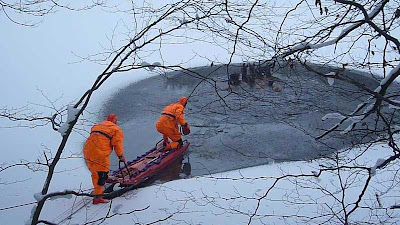 Friderich Kozłowski, 39, said: "If they had crossed one at a time they would have been okay but they tried to go all together and then one slipped and fell - and broke right through the ice. The rest then fell through the hole as well. They may not have realised it was ice, there was a lot of snow covering it." 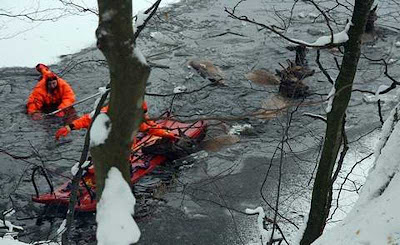 Firefighters used make-shift lassos made from their hoses to snare the deer and pull them back to the banks. Local fire chief Marcin Wawrzynski said: "Our men were dressed in special thermal suits so they got into the water to try to herd the deer towards a second group of firemen who lassoed them with rubber hoses and hoisted them to shore."

Firefighters dried off the deer with blankets and straw before asking a vet to check them over. "They were cold and in shock but after a while they were warm and dry again and ready to go back to the woods," said local wildlife expert Adam Urbanski.
Posted by arbroath at 6:05 am
Email ThisBlogThis!Share to TwitterShare to Facebook