Cabinet meetings usually discuss the state of economy, wars and general matters of governance. However, Egypt's Prime Minister Hisham Qandil recently utilized a meeting to talk about the dangers of “unclean” breasts.

The PhD holding prime minister who studied water resources, somehow, related the lack of clean water to the lack of clean breasts. While meeting with his cabinet members he spoke in an emotional manner as he recounted the struggle of the villagers he witnessed on his trips as a minister. 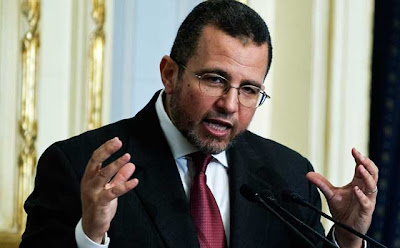 He narrated his experience as a middle-class Egyptian who travelled to the rural areas of the country where he saw the suffering of newborns having to deal with diarrhoea after being breast fed.

The prime minister claimed that the reason behind the diarrhoea epidemic in rural Egypt is that some female villagers are too ignorant to clean their breasts before feeding their babies.

With translated video.
Posted by arbroath at 6:05 am
Email ThisBlogThis!Share to TwitterShare to Facebook

Well, sir, I was in Egypt for four days and developed massive diarrhoea. I didn't suck on anybody's boobs. Maybe it's due to lack of proper filtering of the water there.

If God ever made a more ignorant sob, I'd sure like to know who he is.... What a stupid man.

I suspect that the real reason for the "diarrhoea" epidemic is due to the joke that is known as "muslim cleanliness and purification", particularly that of the males who, from what I understand, enjoy washing each others balls with their tongues.