A traffic accident on a dark and dangerous Harris County, Texas road sent a car flying into the air before it crashed through the roofs of two houses early on Sunday morning. The speeding driver, who apparently didn’t see a sharp bend in the road, hit a grassy berm that sent his vehicle airborne. 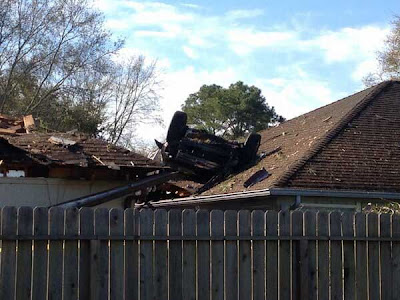 His vehicle flew through a wooden fence, crashed through the roof of one house, then flipped over into the roof of the house next door. “I was woken up at 2am with a loud screech and a boom, boom, boom, the loudest noise I ever heard,” said Kathie Back, who lives next door to the house the car struck first. The vehicle lodged upside down atop the house where it came to rest. Somehow, no one in either home was injured.

Deputies expect the driver to face charges. A witness saw him speeding through a red light shortly before the accident, authorities said. A pistol fell out of the car when it was pulled out of the roof, opening the possibility he could face even more legal trouble. Even if he had a permit for the weapon, deputies said he could be charged with carrying a pistol while committing the felony of driving while intoxicated.

The driver who apparently had been drinking also survived uninjured, possibly saved by his vehicle’s air bags. He appeared to be sending a text message as he was loaded into an ambulance. “I’ve been out here a while and, yes, this is the first I’ve seen anything like this,” said John Laine, an assistant deputy chief with the Harris County Precinct 5 Constable’s Office. “First time in my career.”
Posted by arbroath at 6:03 am
Email ThisBlogThis!Share to TwitterShare to Facebook