Mystery of alien from outer space appearing on photo

An employee of the Bacolod City Treasurer’s Office in the Philippines was surprised to see a 2-foot tall figure that looks like an extra terrestrial creature standing beside her in her photo taken by a fellow city employee in front of the Bacolod City Government Centre at about 4pm on Tuesday. 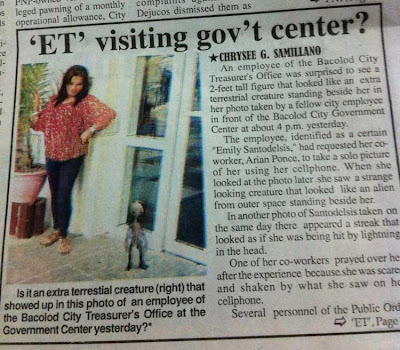 The employee, identified as  Emily Santodelsis, had requested her co-worker, Arian Ponce, to take a solo picture of her using her cellphone. When she looked at the photo later she saw a strange looking creature that looked like an alien from outer space standing beside her.

In another photo of Santodelsis taken on the same day there appeared a streak that looked as if she was being hit by lightning in the head. One of her co-workers prayed over her after the experience because she was scared and shaken by what she saw on her cellphone. 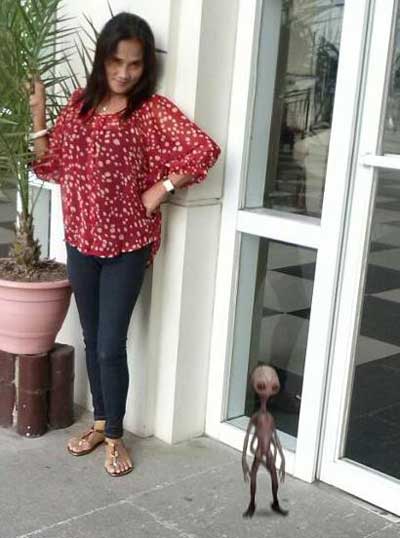 Several personnel of the Public Order and Safety Office, who were on duty to secure the vicinity of the government centre for the arrival of the Israeli Ambassador to the Philippines, as well as other city employees who were preparing to go home, saw Emily while her picture was being taken but did not see any creature beside her. Some employees have claimed that they had seen about four of these “extra terrestrial beings” in the area.
Posted by arbroath at 6:05 am
Email ThisBlogThis!Share to TwitterShare to Facebook

The alien doesn't have a shadow.

The framing is also strange unless you are expecting the 'alien' to be there.

I thought the same thing about both of your posts. What a crock.

No reflection in the glass either.

There's an app where you can quickly add a ghost into the background of a cellphone picture, someone probably has developed an alien one.