Police in Jakarta, Indonesia, are conducting psychological tests on a woman who allegedly drowned her son due to the size of his genitals, a spokesman said on Wednesday. Retno Purwati, 38, was arrested on Tuesday after she went to the East Jakarta police and admitted to killing her eight-year-old son, Vicky Riska, at her house in Cakung, East Jakarta.

“It seems like she committed the murder consciously. She filled up a bathtub with water, tied the kid up and drowned him. Afterward, she dressed him. It was all done very neatly, but we still recommend for her to undergo a psychological examination,” Sr. Comr. Rikwanto said. 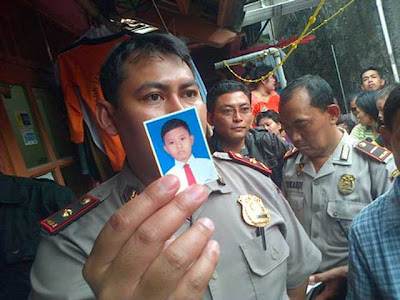 After Retno forced her son’s head underwater, she picked her oldest daughter from school and asked her to go home to look after her brother, while Retno went to the police station to report herself. She explained to the police what she had done and asked them to check if her son was still alive. However, when the police arrived at the scene, the boy had already died.

Rikwanto said the mother told the police that she killed her son because after he was circumcised, his penis shrank. “We haven’t found another motive. So far, the only thing we know is that she killed her son because she was ashamed of the size of his genitals and she was afraid that he would not have a good future,” he said. Retno was charged and faces 15 years in jail if proven guilty.
Posted by arbroath at 6:04 am
Email ThisBlogThis!Share to TwitterShare to Facebook

At the very least she's guilty of child abuse by having him circumcised in the first place. It's a barbaric practice that should be banned unless there's an urgent medical reason.

Too true BoS, Might as well cut your son's ear off, in case he forgets to clean behind it.