Woman’s house burned down by snake she set on fire

Authorities believe a Texas homeowner's response to finding a snake in her yard may have led to the fire that destroyed her house on Wednesday. 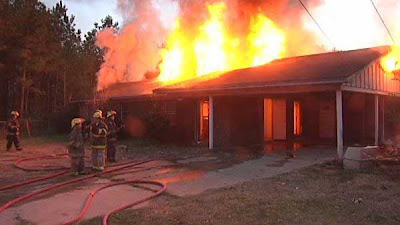 The fire sparked at a home in the Liberty Eylau area of Bowie County. "While cleaning up, she saw snake, threw gasoline on the snake, lit the snake on fire," said Deputy Randall Baggett with the Bowie County Sheriff's Office. "The snake went into the brush pile and the brush pile caught the home on fire."

Despite the efforts of several fire departments that responded to the scene, the flames completely engulfed the home. It is a complete loss. A neighbouring home was also damaged on one side. Liberty Eylau Fire Chief David Wesslehoft says they are still investigating the fire, but that it's not unusual for a burning animal to spread a fire.

"Yes, it could happen with rabbits and big field mice. Once they start burning the grass, they get out of their hole, they have been known to catch fire and then take off." Still, the chief says, a fire started by a burning snake is a first for him. There has been no word from officials on whether charges will be filed.
Posted by arbroath at 6:02 am
Email ThisBlogThis!Share to TwitterShare to Facebook

Well, the snake showed her. Vengeance!

What kind of a moron would try to burn anything to death? Well, well done snake.

How cruel she must be to set a live animal on fire. She got what she deserved.

What a cruel thing to do. Mother Nature and Karma together can be mean bitches.Hahahah!