Mystery of big foot found in the woods

Authorities in Quincy, Massachusetts are trying to determine what two young boys found when they were exploring in the woods.

Sgt. Steven Leanues picked up what appears to be a decomposed foot that the boys found in the woods at Lakeville. 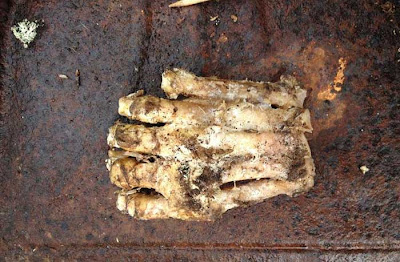 Until the medical examiner does further testing, its identity remains uncertain. “It will take some time before we hear any official results,” Alvilhiera said.
Posted by arbroath at 6:05 am
Email ThisBlogThis!Share to TwitterShare to Facebook