A faulty beer fridge is being blamed for playing havoc with a mobile telephone network in Wangaratta, northern Victoria, Australia. The faulty unit shooting out freak electric signals was believed to have caused interference in the mobile data network across several neighbourhoods of the town.

A team of the telecom company's crack black-spot cops tracked the rogue beer fridge to a garage in Wangaratta. This followed the Telstra network "war room" detecting the interference in the system. Telstra engineers say problems are pinpointed by "software robots" scanning reams of system data. Defective electric waves can interfere with nearby network cells which are the lifeline to smartphones and tablets. 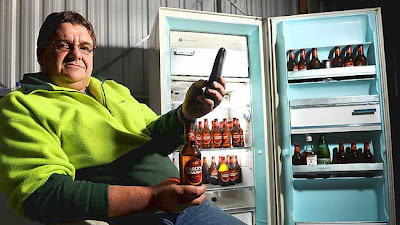 Telstra engineers say any electric spark of a large enough magnitude can generate radio frequency noise that is wide enough to create blackouts on the 850mHz spectrum that carries our mobile voice calls and internet data. Engineers said the motor in the beer fridge was causing the interference. Veteran black-spot detector Greg Halley said a crew using special "Mr Yagi" antennas (named after their Japanese creator) tracked the interference to the address.

"You then knock on the door to see if you can check what is creating the interference," Mr Halley said. Wangaratta resident Craig Reynolds said he was shocked his beer fridge could wield such power. "I'm amazed something like that could knock out part of the network," he said. "You're certainly going to stop and wonder. I'm going to run and see if my fridge is all right next time there's a problem with the network."
Posted by arbroath at 6:06 am
Email ThisBlogThis!Share to TwitterShare to Facebook