Police Sergeant Don Auld thought a thief had fallen through the ceiling and vomited on the floor when called to a charity store break-in in Queensland, Australia. But the slippery criminal turned out to be a 5.7 metre python who left the smelly memento for staff.

"We thought a person had fallen through the ceiling because the roof panel was cut in half," Sgt Auld said. "When they've hit the floor they've vomited and then staggered and fallen over. That's what we thought anyway." The snake had pooed in the St Vincent de Paul store in Ingham and left crockery, clothes and other goods smashed and scattered all over the floor. 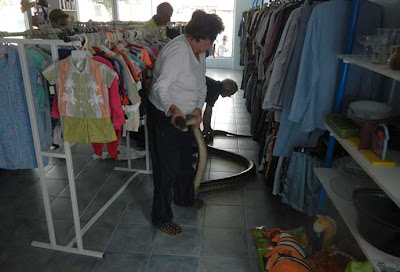 The following day, on Tuesday, police were called back to the store after a large crowd formed outside. "Then we knew no one had broken in and it was a snake all along," Sgt Auld said. "It must have been hiding when we went there the first time." Police didn't have the skills to bag the burglar, and called in a snake handler to take the 17kg python away.

"It's head was the size of a small dog," Sgt Auld said. "It was so big and had made such a mess, we thought someone had gone on a bit of rampage." He suspects the python may have come in through the roof which was damaged during Cyclone Yasi in 2011. The snake has been relocated to nearby wetlands.
Posted by arbroath at 6:07 am
Email ThisBlogThis!Share to TwitterShare to Facebook