A thief who stole a CCTV installer’s kit from directly beneath one of his high-tech cameras has been caught. The man was filmed helping himself to £200 ladders used by Barrie Smith in his Kubix IT camera installation business. The ladders had been left in Barrie’s garden, which doubles as the premises of his business in Weston-super-Mare, Somerset, under surveillance from his security cameras. But the thief failed to spot the CCTV lenses, and was blissfully unaware as they captured his face and distinctive branded clothing on film. 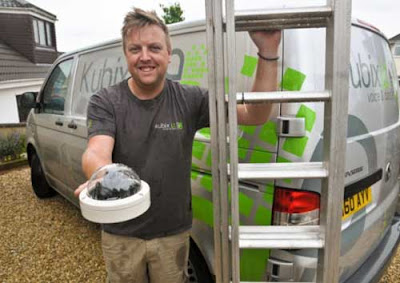 Barrie then posted the footage on Facebook with an appeal for information – and it took less than 24 hours for an anonymous informant to provide him with the crook’s address. Barrie, 35, said: “I was getting my van ready to go out on a job, and went to put the ladders on the roof, and they weren’t there. I went straight to my CCTV and looked back through, and there he was, plain as day, helping himself. He was not a very good thief. His clothing has some really big logos on, and he looked straight at the camera. He could not have been more obvious.”

Barrie called the police, but also posted the film on Facebook, putting up a reward and asking people to share the link and contact him with information. It took just one day for him to get a text message through with an address for the suspect. Details were passed to police, and when they visited the house, they found the man wearing the same clothes spotted in the CCTV, and discovered the ladders stashed in his garden.

The man was arrested, and issued with a police caution, which could mean further action is taken if he is caught on the wrong side of the law in future. While Barrie says he is ‘disappointed’ no additional action is being taken against the thief, he is pleased by the public reaction to his appeal. He said: “I am a law-abiding citizen, and it’s good to know there are other law-abiding people out there. I was offering a reward, but the person even said ‘I don’t want anything for it, I am just glad you have got your ladders back’.”
Posted by arbroath at 6:00 am
Email ThisBlogThis!Share to TwitterShare to Facebook