Man claims grafitti is an abuse of childhood

Graffiti showing a young girl wearing a balaclava and holding spray paint cans has upset a Bristol man. Painted by internationally recognised Bristol artist Nick Walker, the piece on Anchor Road has been the subject of a complaint aimed at the council.

But council officers are powerless to act as the stencil was painted with permission of the building's owner, Oryx Executive Search, who are happy with the artwork. Gil Osman, 74, a retired teacher, said he made a complaint to the council after spotting the image while driving along. He said: "My first impression was that it was a representation of child abuse. This appalled me. 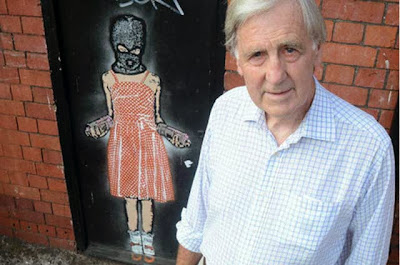 "On closer inspection, I saw that the girl was holding what could have been spray paint cans in her hands, which suggested that it was some kind of statement or protest about graffiti art." He claimed when he first contacted the city council he was told it would be removed within three days. But a week later he was told the property owners would not give permission for the graffiti to be scrubbed off.

He said: "Using a young child's image in this way, no matter what the 'message', I still consider to be child abuse – an abuse of childhood. As a father and grandfather, retired schoolteacher and school counsellor, this image offends me. I am quite sure it also offends others. As a native Bristolian (and proud to be so), I do not want visitors to the city to be confronted by such an image – Banksy or not."
Posted by arbroath at 6:00 am
Email ThisBlogThis!Share to TwitterShare to Facebook

I genuinely want to know why he feels that way. I just see a fairly mundane image, his claim is so bizarre to me that I can't even be incensed, just curious as hell. Though I'm sure the answer would seem just as strange to me.