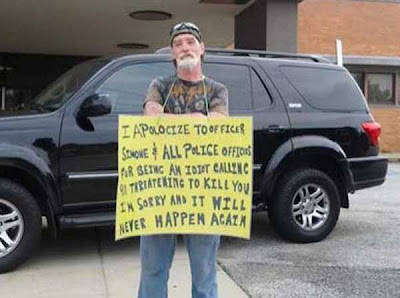 Police said he threatened to kill Officer Simone and other officers back in February. During his career, Simone was shot twice, including once in the head.

The sign reads, in part: "I apologise for being an idiot and it will never happen again." Dameron will have to wear the sign for three hours a day for the rest of the week.
Posted by arbroath at 6:06 am
Email ThisBlogThis!Share to TwitterShare to Facebook