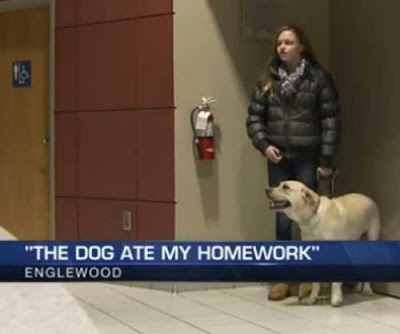 A science project, a chocolate volcano, was too much of a temptation for Reggie the dog. “It was Mt. Haleakala in Maui,” Reggie's owner Payton said. The problem was the volcano had metal pins in it. Reggie ate them and had to go to the vet to have them removed.

Fifty pins showed up on his abdominal X-ray. Some were removed with an endoscope down Reggie’s throat, but there were still more to get out. “We went in surgically, pulled out the one large and four of the small straight pins,” veterinarian Dr. Brian VanVechten said. 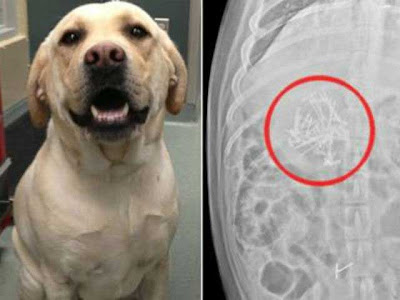 Payton later provided X-rays to her teacher to make her story stick. The science assignment has been redone and handed in for credit. “I completely redid the project with glue the second time.” Reggie and Payton received high praise for their scientific endeavour. “I got an ‘A,’ “ said Payton. Reggie has fully recovered.

With news video. There's an additional video here.
Posted by arbroath at 6:07 am
Email ThisBlogThis!Share to TwitterShare to Facebook

Okay, let me ask the killjoy question here. And it's a question I've had ever since seeing various videos of "volcanos" erupting in elementary school classes:

These volcano models only model the visual aspect of eruptions--they don't work anything like real eruptions, so they aren't even models or analogies of the phenomenon.

So where's the science?

On top of that, she seems way too old for an A ...on a volcano. Before this I thought that was just something fun for 6-7 year olds to make (and she made it out of candy?!) Has her science teacher given up all hope for the students or what? I have had my mind blown