A woman in Huntsville, Alabama, wants some of her money back after a towing company charged her extra for using foul language. 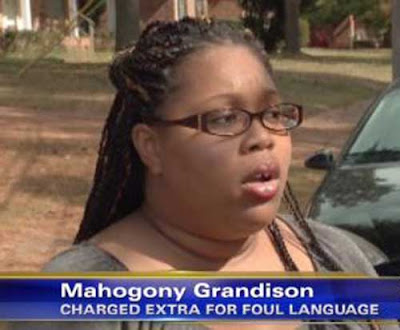 Mahogony Grandison had her car towed when she parked it illegally while visiting a friend. She says other people also had their cars towed. However, they were being charged $200, while she was charged $350.

The company says Grandison was charged extra for cursing at them - something she claims she didn't do. "I explained multiple times it was not me. I even apologized for the person who did curse them out. They were not hearing it."

Police say a verbal argument did take place when Grandison picked up her car. The owner of the towing company says if she apologizes, he will consider giving her a partial refund.

How could they legally do this? I'd be taking them to court.

What Anonymous said. This can't be legal.

Guys, read the article.
Apparently it is not illegal even if I personally think it should be but that's what you get when you have unregulated private companies doing what should be state work.

And if you got a drivers license but unable to read signs you got yourself to blame.

I guess freedom of speech doesn't include curse words. Guess she had to pay it before he'd release her car. I'd take the Turd to court.