A topless lady cost Dimitri Moskovich two broken legs on Saturday. The 48-year-old Russian bodybuilder who had been climbing a rope at Bondi Beach, Sydney, Australia said: "I was looking at a very nice topless girl and I forgot what I was there for and next thing my legs were completely smashed," he said.

"I've done it for many years in the same spot; it was a pure accident once out of a hundred thousand climbs." The seven-metre fall saw Mr Moskovich endure a seven-hour surgery to treat 20 fractures in the lower half of both his legs and a badly damaged right foot. 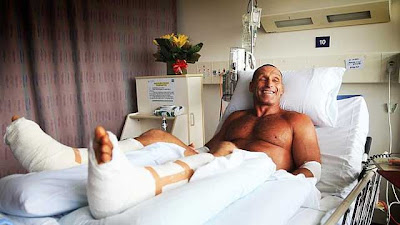 "The moment I looked - I'm a professional - I knew straight away I had no spine problems, but then I looked at my legs and I knew I was f*cked," he said. Training partner Kalvin Smith said Mr Moskobich's knowledge of climbing saw him come away relatively unscathed.

"I could see by the way he fell that he knew what he was doing, he knows how to fall," he said. "He put his legs together and rotated so it's like a high-velocity parachute landing because it takes the strain away from the spine and pelvis. His training, being fit and knowing how to move definitely helped." Mr Moskovich's injuries will see him sidelined from the Bondi cliff rope for up to six months.
Posted by arbroath at 6:03 am
Email ThisBlogThis!Share to TwitterShare to Facebook

I hope the tatas were worth all that.