A woman from casper, Wyoming, faces prison time after allegedly stabbing a white, 5-foot-tall teddy bear given to her by a boyfriend and telling him, “I wish this was you!” Prosecutors charged Carly Marra with aggravated assault and battery, a felony, and possession of a controlled substance, a misdemeanor. She is free after posting a $5,000 bond set on Wednesday. According to a police affidavit, Marra had been in an on-again, off-again relationship with a man named Jordan McAlexander. The two had a 16-month-old child together. Marra moved to Casper in October to live with McAlexander.

Shortly after, she told him she was pregnant with another man’s baby, which she delivered in January. McAlexander began seeing another woman, an ex-girlfriend, and on Feb. 10, he and the new woman got matching tattoos of the Gaelic symbol for soul mate. At 4:45.m on Tuesday, McAlexander told Marra via text that they needed to end their relationship. Marra made plans to leave the state with the children, but asked McAlexander to have one last night with the family. He arrived at the home at 8pm. The couple began to argue after McAlexander wanted to smoke outside. Marra insisted he stay inside. 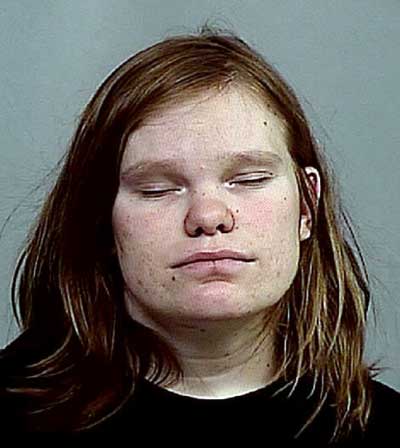 McAlexander pried the knife from Marra, and tossed it down the hallway. He and Marra then wrestled as she allegedly tried to get the knife back. McAlexander grabbed Marra and put her in the bathroom before contacting police. Marra told officers McAlexander tried to go after the knife because he was upset by her cutting the teddy bear, since it was a gift. He allegedly thrust the knife at her two or three times, puncturing her arm. She also said her head was slammed against the corner of a hallway. Police found liquid THC and an ounce of marijuana in the apartment. Marra told police she was going to mail it to her father in Florida, who used it to self-medicate.
Posted by arbroath at 6:06 am
Email ThisBlogThis!Share to TwitterShare to Facebook

So, in conclusion, she stabbed a stuffed animal, and he stabbed HER two or three times, but she's the one arrested?

sorry, all I can think of is how f*cked up the two kids are going to be...

oh, also that grandpa isn't going to get his liquid THC anymore...