A middle-aged man in China had a skipping rope successfully removed from his bladder and urethra after he had inserted it for sexual pleasure.

A urologist surnamed Dong in Yichang City, Hubei Province, said the surgery was complicated because the green plastic skipping rope had knotted. The skipping rope was 1.1-metres long and 4.4-millimetres thick. 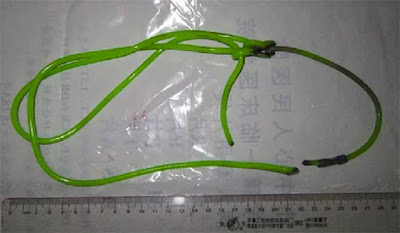 Dong was quoted as saying that what the man had done was "ridiculous" because he put his own life at risk. The man in his forties found it too hard to pull out the skipping rope after he had inserted it. He turned to doctors when it became painful and difficult to urinate.

An X-ray showed a rope with four knots stuck in the narrowest part of his urethra with 10 centimetres dangling out of the urethral opening. A doctor surnamed Zhang said surgery was necessary because doctors couldn't pull it out forcefully. Doing so would have led to serious bleeding and an infection.
Posted by arbroath at 6:02 am
Email ThisBlogThis!Share to TwitterShare to Facebook