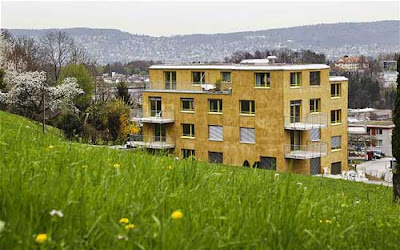 Most of the residents in the building in Switzerland's Leimbach say they also become weak and sick when near mobile phones or other wireless devices that emit radio waves or electromagnetic radiation. While few doctors recognise the affliction, The Healthy Life and Living Foundation, which campaigns for greater recognition for MCS sufferers, convinced the Zurich authorities to provide land for the £4.1 million building.

Swiss officials say the building, which opened in December, is the first of its kind in Europe. They estimate that about 5,000 people suffer from MCS in Switzerland. Many become isolated and say they cannot function in the modern workplace. Lydia Trueb, a Zurich housing office spokeswoman, said: “We wanted to help these people to have a calm home where they hopefully will be less sick.” 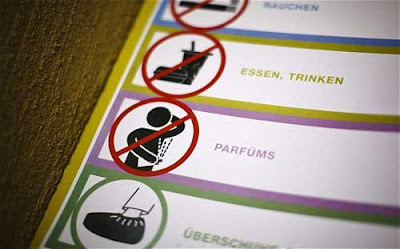 People entering the building are asked to switch off their mobile phones, although they do not work anyway, as the apartments have a built-in shield against electromagnetic radiation which blocks mobile reception. There is no wifi, but there are landlines and Internet connections. The few cleaning and personal hygiene products allowed are on display in the lobby. The block has odourless plaster on the walls, and construction workers were banned from smoking or using aftershave.
Posted by arbroath at 6:01 am
Email ThisBlogThis!Share to TwitterShare to Facebook

I guess they're not going to have any windows either, because light's part of the electromagnetic spectrum. No microwaves, no electricity, no lightbulbs.. Oh, just go live in a cave. Wait, no the background radiation from granite..

Yeah, I dont see any giant lead dome to block out that Sun overhead that's putting out more EM radiation that anything on this planet.....

obviously the 2 people above are ignorant enough to not realize how lucky they are NOT to have this problem.
they should try to go to a concert or a shop or
a restaurant with chemical sensitivity to others deodorant, shampoos, colognes, et al.
keep using all those stinky chemical laden personal care products that you do and you may also have the pleasure of living with Chemical Sensitivity.
must be a reason why more and more people are becoming sick with this.