Family's rescued puppy turned out to be a fox cub

A Canadian family got a surprise this week when it turned out the abandoned puppy they rescued wasn't a puppy at all. The baby animal was in poor shape when it was discovered abandoned near Marsh Lake, Whitehorse, Yukon,over the Easter weekend. "I just defaulted to thinking it was a dog," said Ralph Shopland. The family turned to Facebook to try and find a wet nurse. 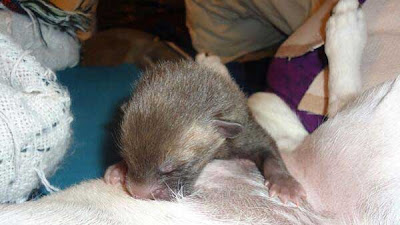 "We needed to get it attended to because we don't have that capability," he said. "I'm not a mommy." For a few days the little one had a surrogate but then they found out the little pup wasn't a pup at all. "Originally, they thought it was a dog, but it wasn't a dog," says Yukon conservation officer Dave Bakica. "Then they thought it might be an otter or a marten or a wolverine, possibly." Officials at the Yukon Wildlife Preserve say they're now pretty sure it's a fox.

Young foxes have white tips on their tail, just like this one does. But they're waiting until it grows a bit more to say for sure that's what it is. For now, it's being bottle-fed every three hours. It seems like he is well hydrated and active," says Maria Hallock of the Yukon Wildlife Preserve. "He doesn't cry between meals so that means he isn't hungry. He's getting enough milk. I only had him for a day and a half and he gained six grams since yesterday."

Conservation officers say in this case the mother fox was likely hit by a car and the little one was truly abandoned. Generally, they urge people not to touch wild animals. "If you think you've found orphaned wildlife, in most cases mother is very close by and just waiting for you to leave," says Bakica. "We try to tell people, please do not pick up any orphaned wildlife." The little fox will now likely live in captivity since he's now imprinted by humans. If there's not room at the Yukon Wildlife Preserve, officials says they'll find him a home at another site.
Posted by arbroath at 6:04 am
Email ThisBlogThis!Share to TwitterShare to Facebook

I will have him.