A 63-year-old man will face court this month accused of spraying the walls of Kingscliff police station in New South Wales, Australia, with graffiti after riding there on a child's scooter. 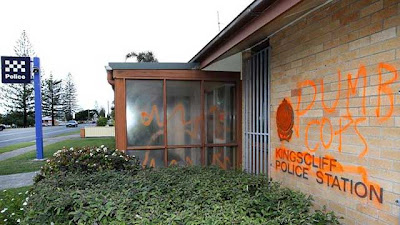 Just after 2.20am on Wednesday, two police officers walked out of the station on Marine Pd after hearing noises. Tweed Byron LAC crime commander Detective Inspector Brendon Cullen said the man had spray painted a CCTV camera before taking to the walls with various slogans, including "Dumb Cops" and "Kingy Boyz Rule".

Insp Cullen said said a scuffle took place between the officers and the man, after he was chased several hundred metres. Insp Cullen said one of the officer involved will be off work for over a week due to shoulder injuries. The man was charged with assaulting and resisting police, malicious damage and possessing house-breaking implements. 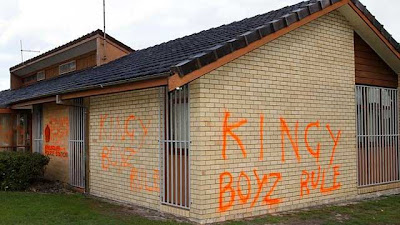 Insp Cullen said the man's motives weren't clear. "The actions we're alleging are quite irrational, particularly with police being in the building at the time," he said. He said police also seized the man's scooter. The man was granted conditional bail to appear in Tweed Heads Court on June 30.
Posted by arbroath at 6:03 am
Email ThisBlogThis!Share to TwitterShare to Facebook