A pair of dog breeders in the Spanish province of Valladolid were surprised recently when two puppies were born green. "I couldn't believe it when I first saw them," Aida Vallelado Molina said. 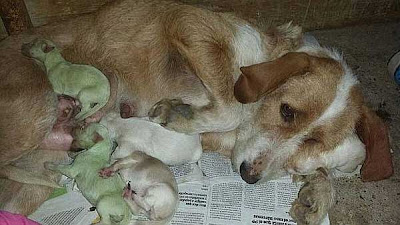 "I thought the puppies were dirty and tried to clean them, but the colour wouldn't come off," said Molina, who breeds hunting dogs with her father in the town of Laguna de Duero. 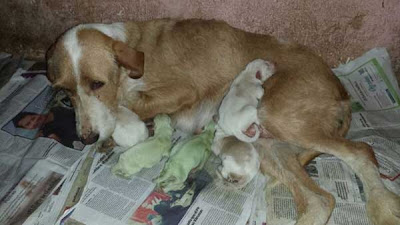 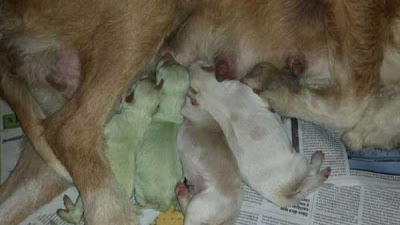 The animals, born on June 3rd, were smaller and weaker than the other pups in the litter. One of them, a female, died shortly after birth while the male pup is still alive, but very weak. He is now beginning to lose his pigment.

The cause of the death of the dead puppy, and the reason for its odd colouring, are now being investigated by local vet Daniel Valverde. "There are no other recorded cases of this happening in Spanish scientific literature," he said after contacting Madrid's Complutense University. Valverde is now carrying out virological and bacteriological tests to try and find an answer.
Posted by arbroath at 6:02 am
Email ThisBlogThis!Share to TwitterShare to Facebook

When it happens to our animal brothers and sisters, it won't be long before it happen to us.

Maybe it's an evolutionary adaptation. Green is good for hunting dongs, no? Also the vet's name--verde means green in Spanish.

How silly that no vet knows. The puppies are stained with meconium, and I have seen this before. It won't wash off, but does wear off. Meconium is fetal bowel contents, and passing it before birth is a sign of stress, as well as being a hazard if inhaled during the birthing process, hence why these puppies did not thrive.