It was supposed to be a simple bath for a little Chihuahua in Sacramento, California. However, it ended up with several firefighters in the bathroom. Bailey the Chihuahua was attempting to jump out of the tub, when he somehow got one of his back paws stuck in the drain. 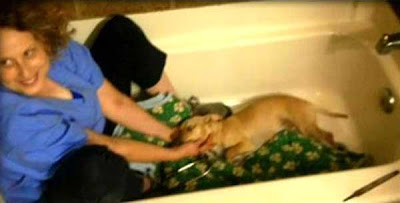 “He jumped up and when he came down ... his foot landed in the drain and it got stuck,” the dog’s owner said. The drama brought out Metro Fire, but chiselling near the Chihuahua wasn’t safe for them or the dog. “The dog was really stuck and was getting really upset about being stuck,” said animal control officer Mechelle Crites.

After an hour of delicate manoeuvering, it was time to call in a vet. Dr. Jean Rabinowitz said this was a first for her. “Pretty soon I found myself on a hot Sunday afternoon with a chihuahua and three firefighters in a bathtub,” she said. She gave Bailey a knockout shot, then held on as crews worked on the tub. 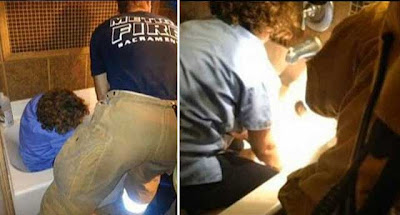 “It was pretty tough,” she said. “It took about 20 hammers each time, each time the dog and I were bouncing in the bathtub.” Bailey would outlast his bath and the tub that had to be destroyed to free him. Bailey's owner says there won't be a next time because she won't be setting the dog down inside the tub anymore.