At approximately 4am on Thursday, police officers were dispatched to Downtown Treasures located across the street from the Polk County Courthouse in Livingston, Texas. 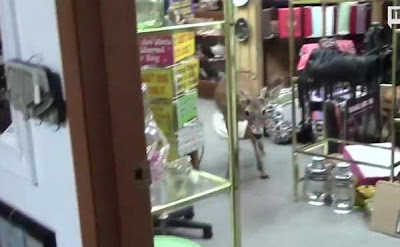 Two deer had crashed through a plate glass window and were running rampant throughout the establishment. Officers from Livingston PD, along with the store's owner, were (after much effort) finally able to coral what they thought was only one deer out of the back door. 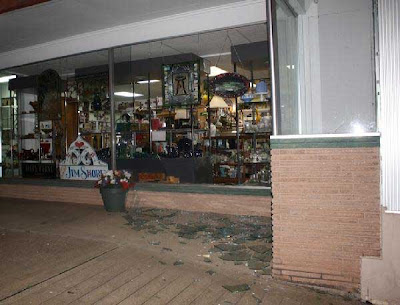 The deer broke a hip in the process and made a mess in the store by damaging merchandise and getting blood on the carpet from being cut by the broken glass. After the deer ran out, the officers tried to find the wounded animal that was last seen running away.

Within a few minutes another young deer was discovered in the kitchen of the Whistle Stop Café which is situated in the same building. As owner Eddie Martin approached the deer, it crashed through a glass door and escaped.
Posted by arbroath at 6:06 am
Email ThisBlogThis!Share to TwitterShare to Facebook