After knocking over bins and scaring the residents of a Daytona Beach, Florida, neighbourhood on Thursday, this black bear needed a rest. Rafael Torres said he followed the bear as it climbed into a hammock and got comfortable. 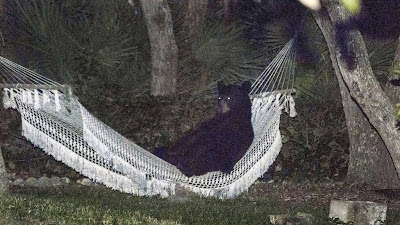 Torres said he was about 60 feet away when he took the photos, and the bear didn't seem bothered by his presence. It stayed in the hammock for 20 minutes before heading back into the woods at around 8:15pm. 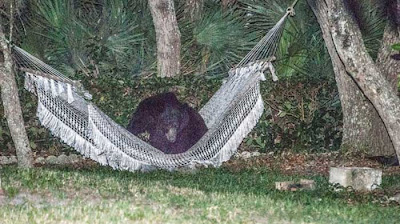 "He got in the hammock like he was a tourist or something," said Vincent James, who owns the home and the hammock. "Then something spooked him and he ran right back there. Then half an hour later I come back and I saw there he is in the hammock again."

The bear has been spotted multiple times in the Pebble Creek neighbourhood in Daytona Beach since Wednesday. Residents say he was looking for food, tearing through a bird feeder and then trash cans. Torres said he has seen a lot of wildlife near that hammock, but this is the first black bear visit.
Posted by arbroath at 6:05 am
Email ThisBlogThis!Share to TwitterShare to Facebook