Pig the unusual dog lives on despite the odds

Pig the unusual, oddly shaped dog was born in the woods northeast of Atlanta last autumn to a feral mother. Pig's profound birth defects make her survival and attitude remarkable. Indeed, it was Pig who saved herself and her sisters by barking, drawing the attention of a woman who took the dogs in. Kim Dillenbeck, from Helena, Alabama, was visiting her sister in Jefferson, Georgia, at Christmas when she heard about Pig. "I met some of her neighbours who came over for Christmas breakfast, and after hearing about Pig, we all went to her house," said Dillenbeck. "I bonded with Pig right away. I thought I'd either be with her or near her helping her find a home. Pretty quickly, I decided to be her mother because she probably wouldn't live," Dillenbeck said. 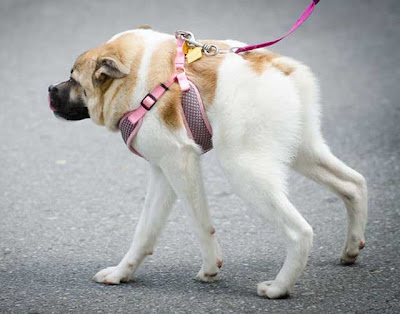 "We assumed that by now, she would be suffocating under her own organs, or something like that, because of her shape." Long involved in animal rescue, Dillenbeck believed that if Pig were to die from her condition, she could handle it emotionally. She's fostered sick dogs before and was with them when they died. "The lady who found her, the vet told her to have her (Pig) put down," said Dillenbeck. But Pig lives on, despite the odds. Dillenbeck said Pig came with the name, and so she kept it. Dillenbeck said Pig may have some Akita, but, really, who knows? "She's a mutt," Dillenbeck said. But beyond appearances, Pig is just a happy, fun-loving dog who likes to play fetch or wrestle with her housemates Lady and Tank, Welsh Corgis Dillenbeck has had for years. 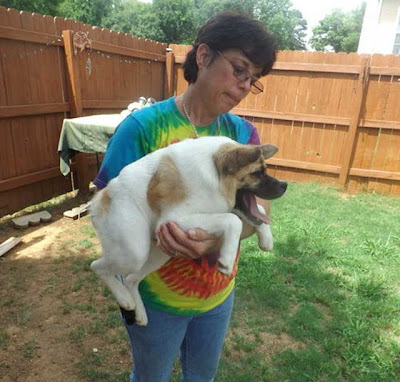 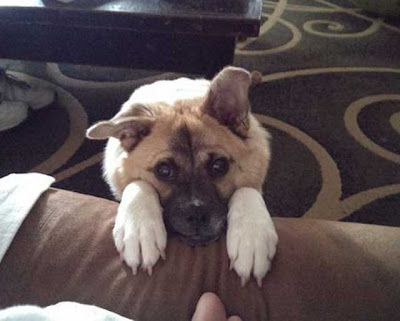 At 8-months-old, Pig weighs about 15 pounds; her sisters are closer to 35-40 pounds. "She's not fully grown," Dillenbeck said. "She's still gaining weight. At this point, she has the potential to gain another 20 pounds, and that would probably kill her." But Pig's veterinarians, Dr David Fuller and Dr Rachael Hudson at Hope Animal Clinic, say Dillenbeck is doing everything right for Pig. "Pig doesn't know there's anything wrong with her," Dillenbeck said. But she has plenty of issues. Dillenbeck says Pig is missing part of her spine; she's missing several ribs. And she has vertebrae that are fused and twisted. Near her neck, her spinal cord splits into two separate cords. Her hips and joints are rotated in the wrong positions.

"The only time she ever cried out was when I got her (micro)chipped. Or when I accidentally stepped on her toe - and you have to step on it really hard," Dillenbeck said. "But she's vocal. She barks when she wants your attention. She makes a weird sort of sound when she's playful." Dillenbeck makes sure Pig eats slowly so she can swallow her food. Pig has choked before, and "I've actually had to Heimlich her a couple of times," Dillenbeck said. "She doesn't have the space in her to eat large meals without getting out of breath because her lungs are crowded." Though Dillenbeck's other animals are spayed or neutered, Pig hasn't been spayed because the veterinarians do not want to put her under anesthesia. "I don't expect she'll ever get out of my control and get a boyfriend," Dillenbeck said. As for Pig's prognosis, Dillenbeck said Dr. Fuller doesn't really know. "They've never seen anything like it, and they say it's going to be interesting."
Posted by arbroath at 6:07 am
Email ThisBlogThis!Share to TwitterShare to Facebook

She is awesome! Kudos to you for adopting her - a lot of folks out there would probably have put her down.

She is so precious! God Bless you for your caring heart to have taken care of Pig.