A Florida man angry about his missing dog threatened to “blow” a woman’s kneecaps off and then shot the man who was also in the house, according to authorities. James Farrell Davis, 55, of Panhandle, Walton County, was charged on Tuesday with attempted murder, aggravated assault and armed burglary of an occupied dwelling.

Walton County Sheriff's Office say authorities responded to a residence on May 21 for a report of shots fired. Deputies discovered that Joseph Justice, 31, had been shot by Davis. Davis walked onto the property and confronted Heather Sue Carden about his missing dog. Davis had a shotgun and threatened to "blow her knee caps off." Davis also stated “No, I’m not going to jail for you, I’m gonna kill you.” 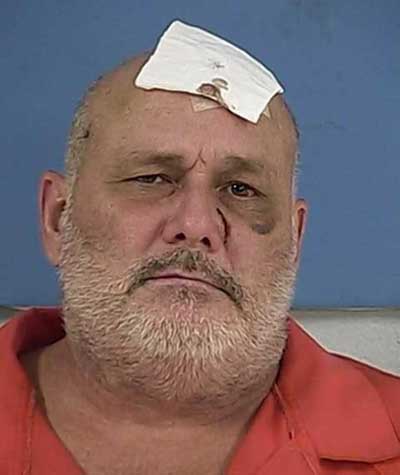 Justice heard the commotion and came out of the house, at which time Davis turned the shotgun toward him and stated, “and you too.” Davis fired the weapon at Justice, but missed the first time. Justice attempted to go back into the home to protect his three children. Davis pursued Justice and a struggle occurred. During the struggle, Davis fired another shot and hit Justice.

Justice was able to get a hammer and struck Davis in the head until he was able to get the gun away from Davis. Deputies took the weapon and the hammer, as well as a semi-automatic pistol found in Davis' possession. Both men were transported to Bay County Medical Center and have since been released. The children were not injured during the incident.
Posted by arbroath at 6:06 am
Email ThisBlogThis!Share to TwitterShare to Facebook

The good old USA, where every nut has the right to as many guns as he wants. This was not what the Founding Fathers had in mind.