Woman shocked at the theft of her 60-foot brick wall

Thieves pretended to be builders before dismantling a wall to steal handmade bricks dating back to the 1890s. The gang even wore high visibility jackets to knock down the wall in the Westcliff suburb of Southend-on-Sea, Essex, before loading the bricks on a truck and driving off. A neighbour even offered the gang a broom to help tidy up, thinking the owners had hired the men to do the work.

Shocked Leigh O’Shea, who is doing up the house and garden of the property, said: “At first I thought someone had reversed into the wall and it had collapsed but then I saw the bricks had gone, apart from some broken ones and a lot of rubble. I just couldn’t believe it. It seems ridiculous that something can be there for more than 100 years and they just come and take it.” Leigh, 56, is doing up the property, which has lain empty for 15 years. 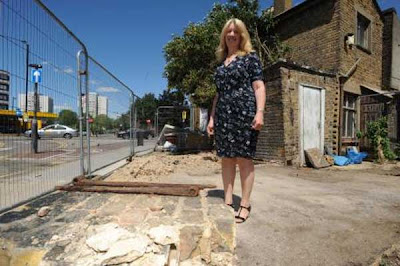 She brought a friend along to have a look at what she had done so far, but found the wall had been taken. She said: “A man nearby said he saw the two people who did it loading the bricks on to a yellow lorry with a flat back between 11am and 11.30am. They started at about 10am. He assumed I’d hired them to take it down. He handed them a broom because he didn’t think they had cleared up very well.” It is estimated the bricks, which were handmade in 1890, are worth up to £4,000 as the wall measured about 60ft long.

Ms O’Shea had been working since Boxing Day with her family to clear the overgrown garden and rubbish both inside and outside the former antique shop and flat, before she and three of her children move in. She added: “Doing up this house was one of those dreams you have. The opportunity to buy it came up and I thought it was now or never. I am just so angry that people should do this, how dare they come and take it? I work really hard and what I have I have got myself. I can’t afford to pay builders, I am planning to do as much work as I can myself and with my children’s help.” Essex Police are investigating the incident, which happened on June 5.
Posted by arbroath at 6:01 am
Email ThisBlogThis!Share to TwitterShare to Facebook