Two women in Santa Fe, New Mexico, recently realized they were being watched by a Peeping Tom during an intimate moment. The tom wasn’t outside, however, he was in their bedroom. 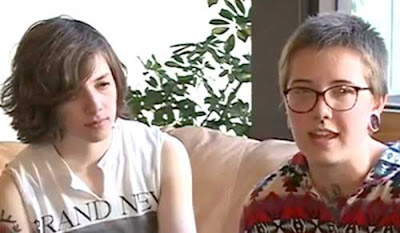 Ashley Willis and Maya Mascarenas have been together for one month. “It was probably one of the most terrifying experiences,” said Willis. On Wednesday morning the women were having sex. They realized someone was watching. “I had never seen this man before and he did not belong,” said Willis. 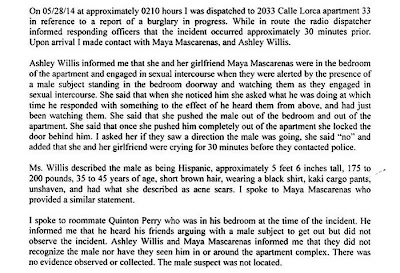 “My initial reaction, I just got up as fast as possible and pushed him out of the room.” Willis said before the intruder ran away he told her he’d heard them from the floor below and wanted to see what was happening. She believes he was trying to get in bed with them. “I think he was definitely intent on joining, and becoming a part of it and placing himself in our position,” said Willis.

Police said the Peeping Tom got in through an unlocked door and didn’t take anything. They said he just wanted to watch. Police also said if he faces charges they’d be voyeurism, criminal trespassing and disorderly conduct. The women described the man as Hispanic, 5 feet 6 inches tall, unshaven and about 200 pounds.
Posted by arbroath at 6:04 am
Email ThisBlogThis!Share to TwitterShare to Facebook

It's amazing that this made the news with the details that were covered.

The world is a better place than it was even 10 years ago.

200 pounds. That's about $400 ?
And the male was 5 feets and 6 pinches tall ?
Well, if he walks into my town I would not recognise him.
I reckon we should have a universal, call it global if you like, system of measurement, maybe we could base it on 10 to make it easier to work out little pieces of the measurement.
We could call it something cute, like a made up word, made up from bits of other words, like met, as in got together, and trick, as in, that's a good trick …. so - trickmet, yes, lets start using it now, so ALL of us will know just how tall and how heavy the peeping tom is, not just the people that know what leagues, fathoms, chains and milies are.

@Williamrocket, the US is oneof only 3 (i think) countries in the world that doesn't use the metric system. With our Congress, I doubt we'll be changing over any time soon. Too many of them are still living in the 19th century.