Security has been tightened up at a Nottingham school after pupils attempted to escape by tunnelling under a high security fence using cutlery pilfered from the canteen. Armed with knives, forks and spoons five Djanogly City Academy students tunnelled their way under a 12ft metal fence at the back field of the Gregory Boulevard campus.

All escapees are thought to be under 14-years-old and have been “spoken to” about their bid for freedom. Acting headteacher Elaine Crookes said: “We can confirm that five pupils tried to leave the school at lunchtime by getting below the fence on the fields at our Gregory Boulevard site. We have spoken to the students concerned, and taken action to repair the hole. 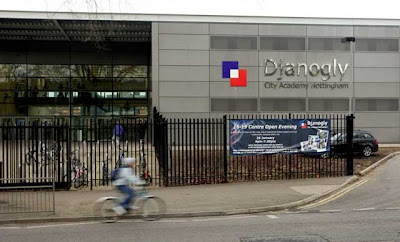 “That part of the fence has also been reinforced. Our staff are supervising that area to ensure our students stay safe and in school.” The hole made by the students has now been filled in and the fence made more secure. In an email, assistant head Andy Roach has asked staff to be on the lookout for more escape attempts. He said: “Estates have filled in the hole and put a metal bar across the bottom of the fence in that area.

“However, can staff on duty on the back field please keep an eye on them digging any more holes for this purpose in other areas along the fence. Estates also stated that quite a lot of cutlery was found in the area presumably stolen from the canteen to aid their digging, so if staff on the duty can keep an eye on students smuggling cutlery out of the canteen.” Pupils aged under 16 are not allowed out of the grounds without permission during the day and the school has a swipe in and out system in place.
Posted by arbroath at 6:00 am
Email ThisBlogThis!Share to TwitterShare to Facebook

How utterly soul destroying must this place be if the children feel the need to make a break for freedom?