Police in Huntsville, Alabama, are investigating a crime they say they've never heard of before. A man stole blood after he donated at the LifeSouth Community Blood Centre's mobile laboratory on Tuesday evening. The technician said the 21-year-old man walked out of the bloodmobile after donating a pint of blood and got into his car.

He then walked back into the mobile lab, claiming he left his identification inside. That's when he stole a bag of blood. Workers said the man wasn't armed, but he appeared agitated. The technician on the bus tried to block the doorway, but he shoved her out of his way. No one was injured in the robbery. 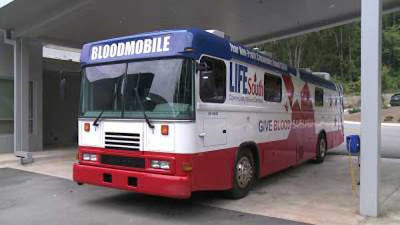 Police are investigating, using the information gathered at the bloodmobile. “A lot of things are protected by HIPA,” explained LifeSouth District Director Jason Hodges. The Health Information Protection Act means that much of the medical information must be kept private - even from the police.

“But we gave what we could to the police and they’re working on investigating for us,” said Hodges. He added that this wasn't something they planned for, but now they will be prepared if it happens again. Police say that it is unclear if the blood stolen was the man’s own. Once correctly identified, the man will be charged with robbery.
Posted by arbroath at 6:05 am
Email ThisBlogThis!Share to TwitterShare to Facebook