A newly-hired teacher was found intoxicated and not wearing any pants inside an Oklahoma high school classroom on her first day of work, according to Wagoner police. Police arrested Lorie Hill on Monday morning after two Wagoner High School teachers found her intoxicated and without pants in an empty classroom she was claiming to be her own. 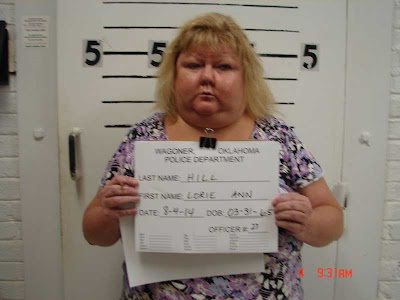 Recently hired by Wagoner Public Schools, Hill was reporting for her first day on the job as all teachers were also returning for their first day back in school from summer break. “They didn’t know who she was, she was apparently new and was supposed to start on Monday,” Wagoner Police Chief Bob Haley said. Police say she admitted to drinking and authorities found an empty cup in her vehicle that contained an odour of vodka, but there was not enough evidence to prove that she commuted to work under the influence.

There were no credible witnesses at her home in Claremore to prove a DUI charge, so Hill was only arrested for public intoxication. “When our officers interviewed her she did admit to having had some vodka that morning before she came to school,” said Haley. Police officers found her in the principal’s office, where the school staff had been detaining Hill since finding her without pants inside the classroom.

Once officers arrived, they had to find a pair of shorts for her to wear and she confessed to drinking vodka in her car before the start of her first day as a Wagoner teacher. The Wagoner School District declined to comment on the personnel matter, and it remains unclear what kind of disciplinary action Hill will face as a result of the incident. Hill was arraigned and released from police custody by Tuesday evening.
Posted by arbroath at 6:06 am
Email ThisBlogThis!Share to TwitterShare to Facebook

I guess the fact that they gave her shorts indicates that it was not just undies (knickers to you Brits) that she was lacking, but basically everything below the waist.

I wondered the same thing, Barbwire.

I think you're probably right.