Passengers on a flight to New Zealand got a scare when a large centipede scuttled up the leg of a first class passenger. The woman noticed the large centipede crawling up her leg while on board a flight from Apia to Auckland.

The centipede then scuttled off, causing commotion amongst passengers in the cabin. The unidentified species of centipede, which was 10cm long, has since been destroyed. 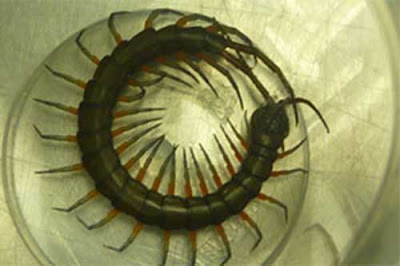 Ministry for Primary Industries spokesman Craig Hughes said said biosecurity staff were waiting to meet the plane on arrival, and once passengers had disembarked, two quarantine inspectors checked the plane and found the centipede between a seat and the cabin wall. "By the size of its claws, it would have at least caused a nasty nip," he said. Mr Hughes said the it was most likely that a passenger accidently carried the centipede onto the plane in their hand luggage.

The incident was very unusual, but showed how important it was for passengers to check their bags for biosecurity risk items, he said. "It's also essential that passengers secure their hand luggage as much as possible so that dangerous critters don't sneak in before boarding. "The last thing that anyone wants is a new population of poisonous centipedes, or worse, crawling around Auckland."
Posted by arbroath at 6:02 am
Email ThisBlogThis!Share to TwitterShare to Facebook