The South Municipal Corporation and the Delhi Development Authority (DDA) were left red-faced on Wednesday after the Delhi High Court found that some of the photographs of potholed roads and pavements filed as part of a status report listing details of a clean-up operation in Dwarka were “photoshopped”. “You just ordered a cursory clean-up and this picture is photoshopped,” noted the court of Justice Badar Durrez Ahmed and Justice Siddharth Mridul, after perusing the affidavits submitted by the civic agencies. 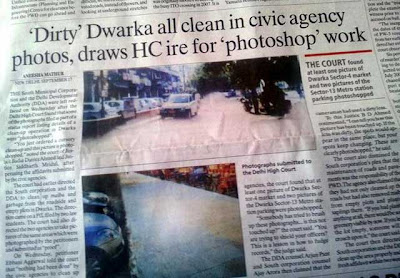 The court had earlier directed the South corporation and the DDA to fill in potholes and clean up rubbish from the roadside and empty plots in Dwarka. The direction came after a public interest litigation filed by two law students. The court had also directed the two agencies to take pictures of the same areas which were photographed by the petitioners and submitted as “proof”. On Wednesday, petitioner Ebbani Aggarwal told the court that “nothing had been done” by the civic agencies to clean up Dwarka Subcity.

On close examination of the photographs filed by the agencies, the court found that at least one picture of Dwarka Sector-4 market and two pictures of the Dwarka Sector-13 Metro station parking were photoshopped. “Somebody has tried to brush up these photographs… is this not touched up?” the court said. “You are trying to shield your officers? This is a lesson in how to fudge records,” the judge said. The DDA counsel Arjun Pant and South corporation counsel Ajay Arora then claimed that the cameraman had used a dirty lens. 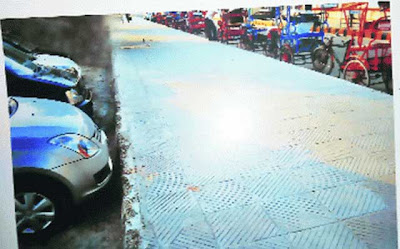 To this Justice B D Ahmed commented, “I can tell you how this picture has been touched up. If the lens was dirty, the spots would appear in the same place, but your spots keep changing. These are clearly photoshopped,” he said. The agency also claimed that they had not only cleaned up the roads but had also removed litter, filth, rubbish, solid waste and remains of construction material from empty plots and planted saplings there. “If you had planted anything at all, there would be some greenery visible by now. If you leave the lot empty, someone will encroach upon it,” the court said. The court then directed the South corporation and the DDA to clean up the area properly and submit fresh photographs within two weeks.
Posted by arbroath at 6:02 am
Email ThisBlogThis!Share to TwitterShare to Facebook