Police are looking for a man who was caught on camera on Tuesday morning robbing a West Philadelphia corner store with a banana tucked inside his sweatshirt. 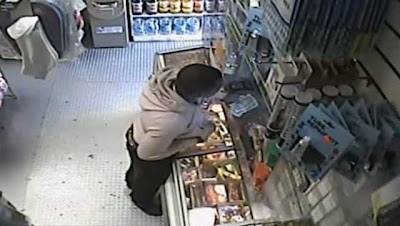 A 24-year-old woman who was working behind the counter of Tejada Grocery told investigators that the unknown man approached her shortly after 9:15am and demanded money and cigarettes.

The suspect held his right hand inside his sweatshirt, acting as though he had a handgun in his pocket, the woman told police. After watching store surveillance video, investigators determined the man actually picked up a banana from the counter and stuffed it inside his shirt, simulating a weapon.

He fled on a bicycle after taking an undetermined amount of cash. The suspect is described as a 5-foot-9-inch- to 5-foot-11-inch-tall, thin black male weighing about 140 pounds. He was last seen wearing black pants and a tan hooded sweatshirt with “Pacific Coast Hollister 19” written on the front in red lettering.
Posted by arbroath at 6:04 am
Email ThisBlogThis!Share to TwitterShare to Facebook