A cat in Florida just might owe its life, or at least one of them, to an alert police patrol supervisor and the Flagler Beach firefighters who helped him free the stuck feline, Flagler Beach Police Capt. Matt Doughney said. A howling cat that somehow became wedged between a garage door and door frame was discovered on Wednesday by a passing police sergeant who heard the cat’s cries.

Sgt. David Arcieri called the fire department, which was able to free the unlucky feline. The cat had likely been on top of an open garage door when it was closed by an unsuspecting homeowner, pinning the cat between the top of the door and the door frame, Doughney said. Sgt. David Arcieri heard the cat howling, stopped to investigate and called for backup, the captain said. “He’s the day shift supervisor and was on patrol. He rides with his windows down,” 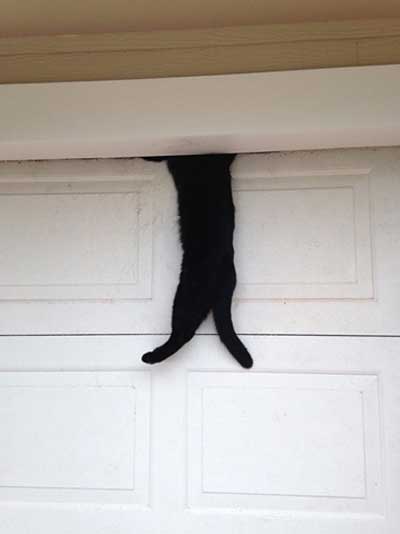 Doughney said, noting that all of his officers are instructed to do so to enable them to hear what is happening on the streets. “In this instance, it was a cat; but what if it had been a child? What if someone had fallen in the backyard and was crying out for help? What if someone was being robbed? You could drive right past and never realize there was a problem.” Arcieri snapped a photo of the stuck cat and called the Fire Department to help him, Doughney said.

Firefighters put just enough pressure on the top of the door with their body weight to allow the cat to fall free. There was no damage to the garage door and the cat walked away on its own, the captain said. Arcieri later spoke with the homeowner and learned the cat is a neighbourhood cat without a specific owner. “If he hadn’t been riding with the windows down, he never would have heard it,” Doughney said. “Kudos to him. Kudos to the Fire Department. It’s all about high-quality customer service. I don’t know how many lives cats have, but that cat definitely owes one to Officer Arcieri.”
Posted by arbroath at 6:06 am
Email ThisBlogThis!Share to TwitterShare to Facebook