Bear cubs rescued after getting stuck in hollow tree

Two bear cubs had to be rescued after they became stuck in a hollow tree. The rescue, in Polk County, Wisconsin, started last Saturday when a local resident heard strange noises from the tree and ended a day later, after the involvement of three different agencies. 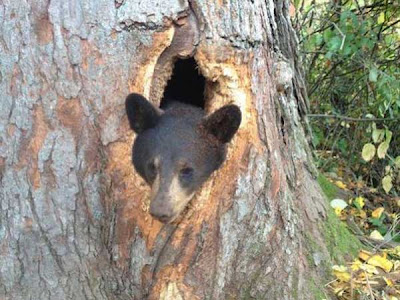 The rescue began on Sunday when the resident saw a snout sticking out of a hole in the tree's trunk and called the Polk County Sheriff’s Department for help. The sheriff’s department contacted the state’s Department of Natural Resources (DNR), which sent two wardens to the scene. When the two wardens arrived with a local wildlife rehabilitation expert, they discovered that it was not just one but two bear cubs stuck in the tree. The wardens believe the bears climbed into the tree through the hole and then became stuck when tree debris fell on them, a DNR spokeswoman said.

The wardens decided they would need to saw around the bears to free them and called in the Milltown Fire Department to help, according to DNR. “We cut a hole in the tree and then we all backed off and waited,” Warden Phil Dorn said in a report released by DNR. The cubs quickly scampered out of the tree and into the woods.
Posted by arbroath at 6:05 am
Email ThisBlogThis!Share to TwitterShare to Facebook