A zoo in Japan has been forced to admit that it tried to mate two male hyenas for four years, after mistakenly thinking that one of them was female.

Maruyama Zoo in Sapporo said it had been given the spotted hyenas, Kami and Kamutori, as a "male and female pair" as part of an exchange with a South Korean zoo in 2010. 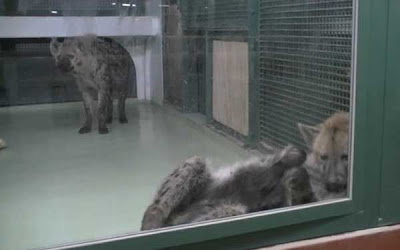 After the two animals struggled to reproduce, the zoo conducted a gender test under anaesthesia. The results confimed that Kami, the now five-year-old "female", was actually a male.

A statement from the zoo said "the external genitalia of the male and female are similar", making identification of sex "very difficult". There are now plans to find an authentic female to breed with either Kami or Kamutori, it added.
Posted by arbroath at 6:04 am
Email ThisBlogThis!Share to TwitterShare to Facebook

that's your best one ever