An Argentinian plumber who fell 5 metres and was impaled on a water pipe after being zapped on the private parts by a high voltage cable says he now believes in God. And to make matters worse, Juan Ramon Monzon, 26, found his boss had been employing him without any medical insurance which meant he almost did not get the hospital treatment he needed to keep him alive.

He had been forced to rely on colleagues to take him to hospital with the pipe still attached, and after being discharged after 24 hours was only given aspirin for the pain. He said: "I didn't know I didn't have medical insurance or indeed any work insurance, and as a married man with the young son, I don't know how I'm going to get by because of the moment I just can't work. But I believe in God - who couldn't believe in God after experiencing what I have and still be alive." 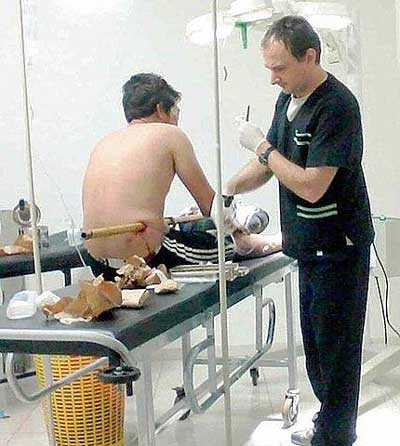 Amazingly the pipe missed all of the vital organs of Ramon, who added: "I was working from the top of the tower installing the plumbing system, which meant putting a huge water tank into place. But I got too close to a provisional connection for the mains electricity coming into the building." In fact he had lent over the electricity supply and been zapped on the private parts burning a hole in his clothing and leaving him with severe burns.

He had also been thrown backwards, and out through an open doorway leading onto a balcony that had not yet been completed where he fell 5 metres onto the ground in the city of Obera, in the northern Argentine province of Misiones. A medic said: "As well as the fact that his body was pierced by metal pipe he also had severe burns mainly to his private parts, a broken nose and a fractured forehead." His sister Roxana Monzon, 28, said: "We couldn't believe it when we realised he didn't have any medical insurance, and we had to put a lot of pressure on the hospital to get him treatment. And even after that they discharged him after a day which is incredible, and gave him aspirin for the pain."
Posted by arbroath at 6:04 am
Email ThisBlogThis!Share to TwitterShare to Facebook

he now believes in God. And to make matters worse..

(Just to take things out of context)

He believes in God because he was very unfortunate and something extremely unpleasant happened to him?

He was PUSHED by god !