Wheelchair-bound woman banned from going inside cafe for being smelly

A wheelchair-bound woman says she is being discriminated against after she was banned from going inside a cafe in Sidcup, south east London, for being "smelly". Kelly Sawyer, of Foots Cray, ate lunch regularly at Star Burger in Sidcup High Street, before being told she could no longer sit inside the eatery. During the summer months the 34-year-old sat in a seated area outside, but she decided to move indoors last Wednesday because of the cold weather.

Ms Sawyer, who suffers from spina bifida - a congenital disorder that affects the spinal cord and has left her paralysed from the waist down - says she was told, almost immediately, to get out. She said : "Basically I went into a cafe, it's one that I always go to except during the summer I've been sitting outside. It wasn't great weather so this time I sat inside. I got to my table where I normally sit. I made sure I was out of the way of everyone else. Despite this the guy working there, he basically said to me you cannot sit inside because the customers have complained about you. 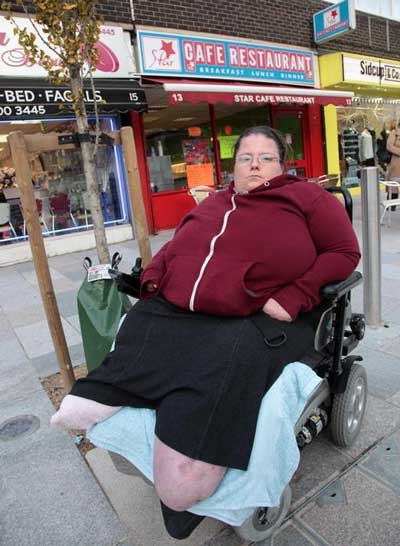 "I said: 'so you are barring me? That's discrimination' and he said: 'Yes, I am barring you'. At this point I did swear, I did call him a wanker. I was quite angry and I expressed my anger." Ms Sawyer has eaten at the cafe twice a week for the last 10 years, usually enjoying a toastie or a chicken burger. She added: "It is quite disappointing and it is wrong. I don't feel like I can go back now. I would like to go back but this is a clear case of discrimination. They're doing it because I'm in a wheelchair. I go there and have food a couple of times a week, I've been doing that for the last 10 years and I've never had this problem before."

Having a disability does not exclude you from proper hygiene. I am so sick of everyone claiming discrimination. If I was a customer and another customer had a terrible smell, I'm sorry, but I would get up and leave. It's not fair on the business. And also, just looking at her I think it's sort of obvious by her weight and disability that she obviously can't do it all by herself. It's sad, but why should everyone else have to put up with this. My son is mentally disabled and cannot go to the bathroom by himself, I certainly wouldn't take him into a café if he was smelly. Me, me, me, that's all it is with some people.

I agree with Anonymous. I would leave also. How can you enjoy your food, your environment if you smell something stinky?

Also agree. If she wanted a cheese sandwich she didn't need to go in there.