RIP A Ho the hippo who jumped from moving truck

A Ho the hippo in Taiwan sadly died on Monday after suffering two accidents last week, once when he jumped from a moving truck and again when his container was dropped as he was being returned to his pond. A Ho, named after the Chinese word for hippo Ho Ma, was found dead in the pond at a farm in central Taichung city. 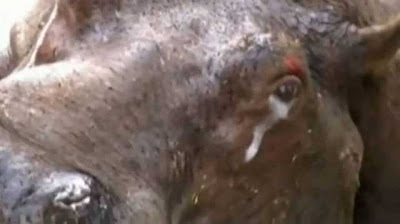 Agriculture Minister Chen Bao-ji has slammed A Ho's owner, the head of a private ranch, for what he said was carelessness in transporting the animal and, while a post-mortem will be performed on the mammal to determine the exact cause of death, the government is considering prosecuting the hippo's owner.

"The city government has asked prosecutors to look into the case," Chen Ming-hui, a local official, said, adding that the ranch has been ordered to come up with a plan to improve the management of the rest of animals being kept there. The initial result of the autopsy performed in Taipei Zoo linked the tragedy to the first fall, which crushed the beast’s diaphragm. The owner could face a jail term of up to a year under the island's animal protection law.

The first of the accidents happened on Friday when the panicked hippo jumped from the truck he was being transported in, breaking a leg. Then, when the hippo was being taken back to the farm for treatment of its injuries, the cable on a hoist broke and the animal's container crashed to the ground from a height of two metres. "The animal was not properly protected during the transportation process, leading to its injuries. What's worse, it had not received due medical treatment the last two days," said Chu Tseng-hung, the head of the non-profit Environment and Animal Society of Taiwan.
Posted by arbroath at 6:04 am
Email ThisBlogThis!Share to TwitterShare to Facebook

This is utterly horrific and disgusting and heartbreaking. I pray that whatever organization was responsible for this poor creature's care does not have any more animals of any variety in its charge. Kev, how can we find out more? This has been darkening my heart since first mention...

The hippo was kept at Skyzoo in Taichung, Megan.

They appear to have a wide range of animals.

I'm glad to know that at least there are laws to protect animals. Now all they have to do is enforce them.

I really hope they do enforce them, Barbwire.

Only time will tell.