A stray ginger cat sneaked into a seafood store at Vladivostok airport in eastern Russia and treated itself to fish from the deli counter. The animal's feast, which included squid and flatfish, was worth 60,000 roubles (£660, $1,000). 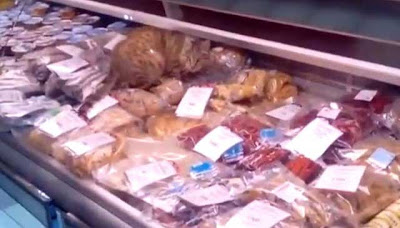 The feline burglar also went for the dried octopus - he tore up the packaging, but couldn't quite get to the food inside. The shop owners still had to count the cost because the packages were broken open.

The shop was forced to write off the entire fish counter the cat had laid its paws on, to comply with sanitary rules. The store was thoroughly disinfected afterwards, its owners have promised.

The cat's feast was spotted and filmed by airport staff, who were amused by the gluttonous animal for some time before calling the shop owners. It's unknown how the cat managed to get into the store, although according to airport staff it's a local stray and sometimes wanders into the airport.
Posted by arbroath at 6:04 am
Email ThisBlogThis!Share to TwitterShare to Facebook