Constipated goldfish has life made better by £300 surgery

A man was so fond of his constipated goldfish that he paid a vet £300 to operate and ease its suffering. Vet Faye Bethell used tiny instruments to remove one lump close to the fish’s anus, and another from its dorsal fin. The fish-lover had taken the sick, three-inch pet for a consultation at Toll Barn Veterinary Centre in North Walsham, Norfolk, according to Miss Bethell, 29.

At first he had baulked at the price quoted for the treatment and went away. But he had returned five minutes later and asked for it to go ahead. Goldfish can live up to 10 years. The ailing fish, which has made a full recovery, was two years and 10 months old at the time of its operation. The delicate procedure, which lasted about 50 minutes, involved introducing a carefully-measured anaesthetising agent into the fish’s water. 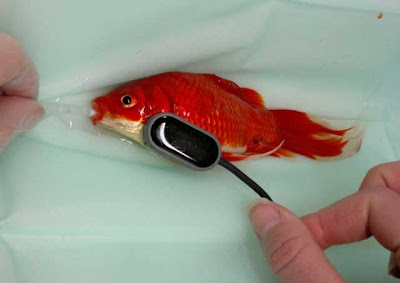 As it lost its balance, it was removed from its tank and placed on a waterproof drape. The anaesthetic water was then introduced into its mouth via a tube and bubbled over its gills, through which it breathes. Using a miniature heart-rate monitor, Miss Bethell checked that the fish was properly “under” before using a mini scalpel to remove the lumps.

She then sewed each cut with three stitches, finally using a special “glue” to cover and waterproof the fish’s scales before it was gradually re-awakened. “There was nothing special about the fish. He just liked it a lot. People love their pets – but that was an expensive little goldfish,” said Miss Bethellk. The Toll Barn practice opened a year ago and specialises in exotic animals, as well as the more usual pets.
Posted by arbroath at 6:00 am
Email ThisBlogThis!Share to TwitterShare to Facebook

If you care about your pet and can afford it, sod it, it's only money.

I honestly thought this was a joke news story. It wasn't that the man went to ease his fish's life, but the description of the tiny heart monitor, etc. I went and clicked on the original story to make sure it wasn't the Onion. So now I've learned many things.

Spot on Ratz. I paid a few thousand for an op on my dog. It's only money after all, and doesn't really compare to the pleasure of my dogs company for many years to come.

Cracking story though, who'd have thought that kind of op on a goldfish was possible.