Critics are unhappy about plans by a former gangster to hold bare knuckle boxing bouts in his south east London back garden. Dave Courtney has applied to Greenwich Council for a licence to hold the event at Camelot Castle - his famboyantly decorated home in Plumstead which includes its own sex dungeon. His 100-capacity event on January 10 is due to take place in the back garden and adjoining alleyway.

The application comes after news surfaced earlier this year that organised bare knuckle fights were already taking place at the property. But a decision by the council to grant a temporary event notice for the latest round of boxing bouts has been objected to by a string of people, including the police. Simon Henderson from Greenwich police's licensing team wrote: "Mr Courtney has provided no information as to how the event is going to be run and controlled. 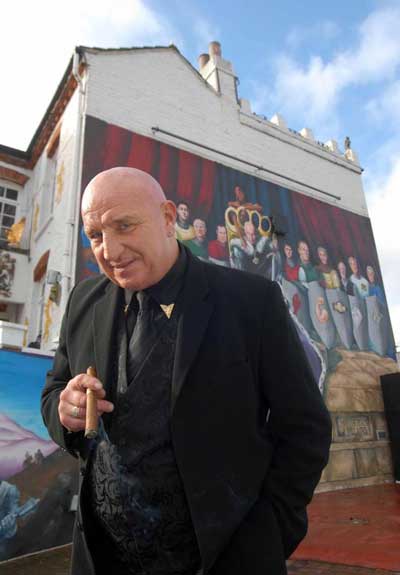 He added: "Mr Courtney has failed to provide information as to how he is going to protect the safety of the guests attending or of the competitors taking part and also how he is going to prevent nuisance to his surrounding neighbours." Sally Lang from the council's licensing department also raised a long list of concerns, from medical provision that will be provided, to lighting and the proximity of a neurological unit for head injuries. She concluded: "Boxing is a dangerous sport and I do not consider that a residential premises is a suitable venue to hold such an event."

Mr Courtney claims to have had friendships will legendary underworld figures like the Krays and Lenny McLean in a criminal career which saw him shot, stabbed and have his nose bitten off. In recent years he has become an organiser of bare knuckle fights around the country. His latest application is in the name of David Courtney OBE - standing for "One Big Ego". In 2011, his stepson Genson Courtney was shot dead in Greenwich following a feud with uncle David Pinto - later jailed for life over the murder. A licensing committee will discuss the boxing event on January 6.
Posted by arbroath at 6:01 am
Email ThisBlogThis!Share to TwitterShare to Facebook

I'd hardly consider the back garden to be the appropriate venue, but bare-knuckle boxing is generally safer than with gloves. The fights are shorter and people generally stop when they break their knuckles, but with gloves you keep causing head injury after head injury. The force of the blows are somewhat lower with gloves, but there are more of them.

It had never occurred to me that bare knuckle boxing could be safer than 'normal' boxing.

But as you say, people break their knuckles.

...thought it was Kojack ! Who loves ya baby?

Arbroath: Gloves also impart about an extra 10oz to the impact.