A Dundee woman has been left counting the cost of the wind after £530 she was carrying blew away. Indea Ogilvie had just lunched with a friend in Broughty Ferry and was making her way back to her car when she dropped her purse. The 19-year-old, who was carrying takings from the Perfection Beauty Salon, Lochee, then watched in horror as the wind swept her cash away.

The grief-stricken mother claims that no one attempted to help her as the notes evaporated in a “tornado of money”. Despite scouring the street with her friend for almost an hour, she recovered just £10. “I’m absolutely devastated,” Indea said. “I’d just had my dinner with friend and was walking back to the car when I dropped my purse. I was going to the bank to put all the money away. My purse was shut but when it fell it just burst open. 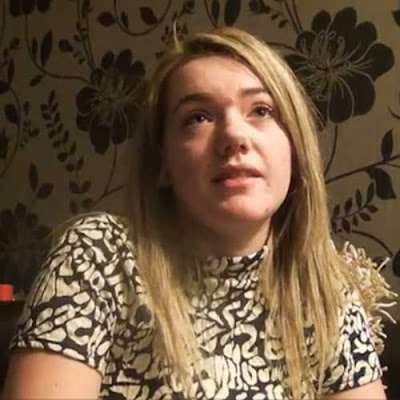 “The next thing I knew it was just a tornado of money. In one second it was just all up in the air. No one tried to help me at all, people just stood staring. It was awful. I had my baby with me and he's only nine months so I couldn't just leave him." Indea has now launched a desperate appeal for people to hand in any money they might find, but is holding out little hope. She said: “There’s nothing that can be done really. It just blew away in every direction.”

Notes have begun turning up in and around Broughty Ferry. Gillian Hepburn, manager of the Orchar Nursing Home said £40 has been found in the home's grounds. She said: "Two £20 notes have been found. One was handed in by a visitor and a nurse found the other one at the back door. We think they're Indea's as they are pretty muddy. We'll keep looking for more." She said the money will be returned to Indea if she contacts the home.

Includes video interview with Ms Ogilvie. Many thanks Paul!
Posted by arbroath at 6:03 am
Email ThisBlogThis!Share to TwitterShare to Facebook

She carried the takings around with her and went to lunch rather than taking them straight to the bank? No sympathy.

I totally agree with Gareth. If you're charged with making a bank deposit, you do straight to the bank. The less time the money is with you, the better.