Boy, 11, responsible for fifth of Shepton Mallet's crime told court he wants to be a bank manager

An 11-year-old boy blamed for a fifth of crime in his home town has escaped with a slap on the wrist - after telling magistrates he wants to be a bank manager. The youth arrived at Yeovil Magistrates Court in Somerset accompanied by his grandfather. Proceedings had to be adjourned because the adult wasn't his legal guardian - and the youngster was driven away by police to fetch his mother. The case resumed two hours later when he returned in her company and grinned as he was escorted into court by a policeman. He was previously given a conditional caution for two counts of violence against a person, arson, two counts of criminal damage, theft and handing stolen goods. But he has now received a three month referral order for a further two crimes of threatening behaviour at the Youth Court. All the offences happened in the space of a few days last November - causing a sudden spike in recorded crime in the sleepy Somerset town. There were 50 crimes reported that month, a sharp increase on the 40 reported the previous year.

Police believe the boy is responsible for up to ten of those crimes after coming to their attention at the end of June. Despite his shocking record of offending the boy told the court he wants to be a bank manager - because he's "good at maths''. Describing the latest offences, Judith Morris, prosecuting, said: "The offences took place in November last year at the Townsend retail park in Shepton Mallet. [He] was there, he walked into Costa Coffee and shouted various swear words when inside. In the store was mostly mums with children or elderly people. They were alarmed and distressed. After running out, a few minutes later he was outside a Carphone Warehouse. An 11-year-old girl was there. He called to get her attention and then he pulled down his trousers and pants exposing his genitals. She went home and told her mother." The boy entered his guilty pleas and only stood to confirm his name, age and address. 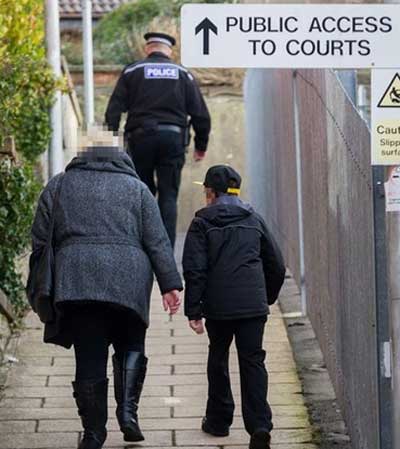 He sat up straight behind a courtroom table - but had to be told to pay attention at one point and later to take his hands out of his pockets. Ray Peters, defending, said: "I have to say, over the short period of time I have spent with him, he has impressed me as being a nice, well behaved and intelligent boy. His mother has tried to get him on the straight and narrow. She tells me he has several issues, particularly with anger. So far as these offences are concerned, I think they can best be described as showing off in front of older boys who he is clearly better off staying away from." His mother, who sat beside the boy when the sentencing was read out, spoke highly of her son who had fallen in with the wrong crowd. She told the court: "Things started to spiral out of control." His mother said he gets "very, very bored". “He gets very frustrated,” she added. His granddad added: "He's a very bright. A very clever boy. He has just got in with the wrong crowd and wants to impress them.”

The boy had his own turn to speak and said that he likes to go out with his friends, but also playing cricket, basketball and football. He also said that when he grows up, he wished to be a bank manager. Sentencing, Chair David Phillips said: "I'm sure now it has all taken place you can appreciate how frightened people were. You realise that is wrong. We have heard consistently you are an intelligent boy. In terms of age, you are. You will now be given and opportunity to put this behind you." Speaking outside court, his mum said her son had not had sufficient support. She said: "A lot of people have been supporting me and saying they have been let down by authorities. It's so frustrating. He gets bored and frustrated which can make him more upset and destructive and angry. For me as a mother this stress is awful. There's no anger management, no counselling. It has been awful. There's limited school support. That's why it's taken so long - lack of funding."
Posted by arbroath at 6:02 am
Email ThisBlogThis!Share to TwitterShare to Facebook